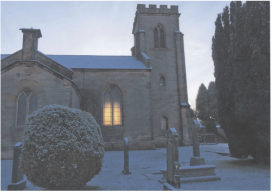 Our local parish church seeks to be inclusive and welcoming and we meet for worship every Sunday.

History
The current St Michael’s is the third church in Wark, consecrated in 1818 it is considered to be a fine example of Regency Gothic and follows the then fashionable austerity of clean naval lines and precise no-nonsense detailing.

The first known church in Wark was built in memory of King Aldwarf, who was murdered in 688, and the second around 1100 when it formed a part of the ancient chapelries of Simonburn parish. First mentioned in 1360 it shared a chaplain with Haughton however, by the 1760’s this second Wark chapel was standing in ruins and although there was a memorial dated 1686 the building had ceased as a place of worship long before that.

The history of the current church begins with James Radclyffe (or Radcliffe), the 3rd Earl of Derwentwater (1689-1716) who was a leader of the first Jacobite rebellion of 1715. He was beheaded on the 24th February 1716 and the government confiscated his estates, which in the North Tyne included several mines and quarries.

The profits from these former Derwentwater estates in the North Tyne had been redirected to the Greenwich Hospital Commissioners and, following the victories of Admiral Lord Nelson by 1818 Greenwich Hospital Commissioners were persuaded to build new churches at Thorneyburn, Greystead, Wark and Humshaugh. These were to coincide with the reorganising of the ancient parish of Simonburn and provided sinecures for retired Royal Navy Chaplains, beginning with Isham Baggs who had been a Naval Chaplain for 17 years and had been the Chaplain for the Assembly in the island on Jamaica.

The architect for the current church was H.H.Seward who had been a pupil of Sir John Saone, the former Architect General to the navy, and the contract to build it, ran from 1814 to1818, was set at £7,470:17:0 with the main contractors being R. Duke of Gateshead and W.Profit from North Shields. H.H.Seward specified the plain windows but the east window was designed by Henry Holiday in a style resembling the artist Dante Gabriel Rossetti and it’s three figures together in one window is believed to be unique to St. Michael’s.

Also of note is the altar cross, which originally stood in The Royal Chapel within Buckingham Palace, and carries the inscription ‘Given to the palace by Tzar Nicholas II’.  It was presented to the parish in 1931 by His Majesty King George V during the incumbency of the Reverend Spencer Wade B.A.

The Wark parish has been included in various reorganisations since 1818 and is currently in the benefice of Wark, Simonburn and Humshaugh.